Through a process of exhaustive man research he calls “keeping his eyes open,” Dick Masterson has compiled a Magnum-size list of the ways men are better than women. It is an infallible compendium of man’s greatness, filled with the most egregiously fallacious arguments ever put to words, but with some kind of miraculous, rock-solid man logic dripping like motor oil from every sentence. It is a manifesto more memorable than bullshit like High Fidelity or which Axe baby powder Maxim thinks you should slap on your nuts before clubbing, more chock-full of devastating man quotes than Oscar Wilde with two wangs. Most important, it is the only one of its kind. In Men Are Better Than Women, Dick Masterson dispenses logic from his man mouth into the eyes of his male readers like some kind of mighty mother man eagle with nutrient-rich word vomit. It’s a book that makes you feel like driving a train into a dynamite factory and then tearing a telephone book apart with your bare hands, just because that’s the way men have always done it.

Masterson’s chapters are simple and self-contained, demand no commitments from readers, and have an immediate payoff. Men Are Better Than Women is a dangerous work of satire — not dangerous in a revolutionary sense, but dangerous in that it walks the razor-thin line between cruelty and absurdity. That line is called hilarious. 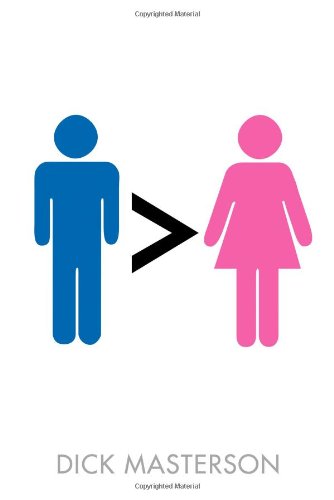 What the reviewers say

From a Woman’s Perspective…

I thought this book was hilarious. Blatantly satirical, this book is perfect to pick up when you just need a laugh. I think it would make a great gift for any “guy’s guy”. My boyfriend bought this book for me since we always joke about which sex is greater, so it’s also a funny gift in that respect. As I read it, I didn’t feel like it was aimless, insulting rants against women. It was so over-the-top and ridiculous that I just laughed my a** off. I think anyone who enjoys that sort of humor can enjoy this book. I even read several chapters out loud to a group of both male and female friends, and they all equally enjoyed it.

One thing that I feel I must stress in light of recent comments is that this book is supposed to be HUMOROUS. It is by no means true. I do not believe that men are better than women. I also do not believe that women are better than men. I found the book funny because of the stringing together/meshing of expletives and the obvious generalizations. I can enjoy sexist jokes at my expense in the same way that I can enjoy blonde jokes even though I’m blonde. I don’t think most people would be upset by a book of blonde jokes, and I feel that this is along the same lines. If that is not your brand of humor, then perhaps this is not the book for you.

Fred & Friends Tank Up is a Coffee Mug Packaged individually in an attractive gift box. The unique feature is...